This newsletter will come to you twice per year to inform you about CWE symposia, STOWA activities and to announce other events and news.

Please e-mail us so we can spread news about any upcoming events, job offers, symposia, PhD defences or publications, either on our website, twitter or the next newsletter.

Please check our website for a complete overview of events.

The upcoming CWE symposium entitled 'Half a century of fundamental and applied wetland ecology: from acidification to climate change' is dedicated to the retirement of Prof. dr. Jan Roelofs. Please register on our website.

For a complete overview of STOWA events, please check the STOWA agenda.

Silicon is an abundant element in the earth crust dissolving in water as low concentrations of silicon hydroxide or silicate. Dissolved silicate can be taken up by organisms to fulfil special roles: the diatoms (in Dutch: kiezelalgen) possess a mechanism to polymerize silicates into cell walls with a characteristic structure. This deposition process is not energetically demanding –silicates form a cheap building material already used by ancient organisms such as radiolarians and sponges. Fig. 1 shows the immense complexity of silicate structures formed in radiolarians. The capacity to use silicate led to the evolutionary success of diatoms relatively late: this group of algae expanded as important photosynthetic producers in inland waters and the sea only 100 10x6 years ago.

The role of the silicates for aquatic biota is long known and accordingly dissolved silicate in seawater and freshwater water is considered as a nutrient and its concentration is measured in water monitoring. Dissolved silicate is being depleted in the growing season during the spring bloom of diatoms; subsequently other algae dominate the phytoplankton. Silicate is a natural product presumably not much affected by human activities, unlike phosphate and nitrogen compounds that diffuse into water with a dramatic impact on nearly every aspect of aquatic systems. Remarkably a new Dutch textbook on inland waters (Hoogenboom, 2014, KNNV, 419 pp.) does not even hint to a role for silicate, while two other elements, iron and sulphur, interfering with the phosphorus cycle, are clearly explained. How come? 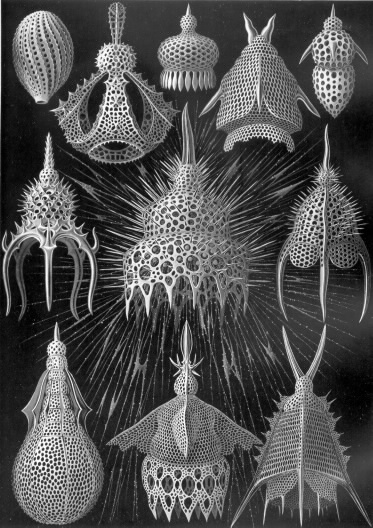 Let us face another linkage of biogeochemical cycles. In recent years questions on elevated carbon dioxide levels in the atmosphere have triggered studies on climate change and ocean acidification and new insight into the role of silicate emerged. Emeritus professor Schuiling from Utrecht University proposed the enhanced erosion of common silicate rock (olivines) as a potent trap for carbon dioxide. In the process of both natural and enhanced weathering silicate minerals dissolve into surface water.  The primary goal of enhanced weathering is extra carbon dioxide trapping thereby reducing the acidification of water. The release of dissolved silicate is an associated natural process. A proposed global scale engineering of carbon dioxide is subject of scientific debate and rigorous testing needs to be done. Yet the local application of the natural mineral olivine has been simply started based on theory. Schuiling, a geologist, coined in 2012 that increased silicate dissolution could counteract the shift from diatoms to cyanobacteria in eutrophic Dutch waters and could be instrumental in combatting a nasty consequence of eutrophication: blooms of cyanobacteria. The idea was killed of by a team of prominent Dutch wetland scientists (de Senerpont Domis, van Donk, Lürling, Huisman and van Dam, 2013) in the magazine H2O, arguing that the mid-summer application of silicate would not stimulate the heavy diatom cells sinking to greater depth. Poor geologist that endeavours to cross the borders of wetland ecology! Are some established views on eutrophication to be revised? Is the exclusive focus on nitrogen and phosphorus scientifically sound?

Currently there is some evidence that the silicate cycle of Dutch waters has been greatly modified. In Lake Marken dissolved silicate is always low and many years ago the water from the Rivers Rhine and Meuse proved to be depleted from silicate by diatom blooms stimulated by high nitrogen and phosphate concentrations (Admiraal et al., 1990, Biogeochemistry 9,175-185). There is also evidence on the importance of the silicate cycle brought up by recent studies of the group of Eric Struyf (Antwerp University, Struyf and Conley, 2012, Biogeochemistry 107, 9-18; see CWE symposium, 2010).  Silicate fixation by diatoms and marsh plants (notably reed) and dissolution of biogenic silica is clearly a basic ecosystem process with repercussions for the response to eutrophication. But why is silicate banned from our textbooks and banned from the toolbox of water management?

We recently launched the CWE twitter account to keep you up-to-date on everything related to wetland ecology between newsletters.